Some people say that the ambulance paramedic's job is the toughest in having to deal with accident victims or critically ill patients. Paramedics do not draw attention to themselves but carry out their work in quiet efficiency, always at the frontline of life-saving work to re-ignite the light of life for those on the brink of death.

Ambulance paramedics, too, are humans with feelings and moods. When their patients are in need of treatment, however, they have to rein in their personal feelings because nothing elates them more than succeeding in saving a life! See how paramedics save the lives of citizens and bring hopes to one another's life. 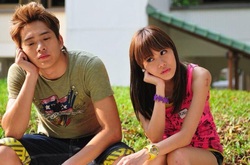 Adeline acts as Elsie, the girlfriend of Xu Wensong (Yuan Shuai) in Rescue 995.

Elsie is a outgoing and adventurous girl. She is Wensong's girlfriend and spends most of her time with him and his friends. She and their clique tends to dare Wensong to take money from his grandmother in order to buy drugs,eat and have fun. She got drowned by skinny-dipping and consumed drugs, but later was saved and sent to hospital by the paramedics.

Will Elsie turn over a new leaf or continue to be a baddie? Catch the episodes on XinMSN Catch-up TV!